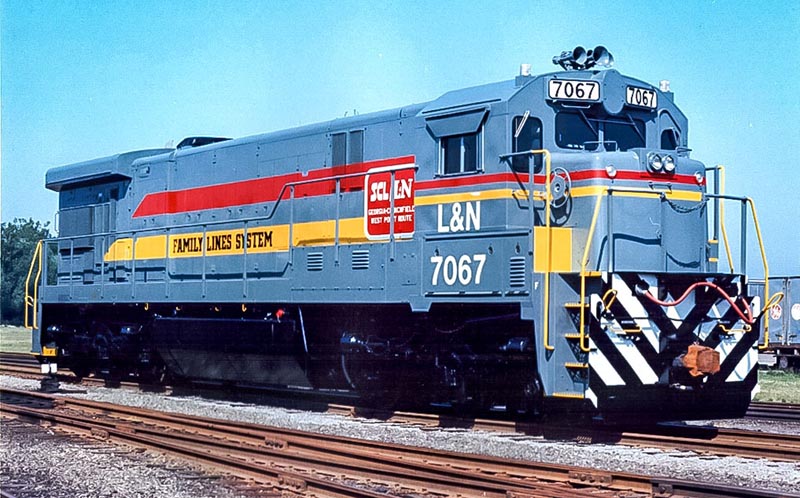 Huntington, West Virginia — This week, Kentucky Steam Heritage Corporation accepted a donation of a former Louisville & Nashville diesel locomotive, former CSX 7067, a C30-7 type engine built by General Electric in 1980. The engine is a gift from the Collis P. Huntington Railroad Historical Society, which announced the donation at their May, 2021, board meeting.

The locomotive, which is one of the last remaining of its kind in the United States, is one of many GE “road switchers” that ruled U.S. rails in the 1980s and 1990s. The L&N ordered 44 C30-7s between 1979 and 1980, though most of their operating life was for CSX Transportation after the L&N was consolidated with numerous other railroad companies in the early 1980s.

After it was retired by CSX in 1999, 7067 was painted in Marshall University colors by the CSX Huntington Locomotive Shop and was used for years in the Huntington area at university functions. After several years, the engine was unable to find a long-term home, so it was given to the C.P. Huntington group in 2017 by CSX and stored in their South Yard.

“This is an exciting and unique addition to our collection,” said Chris Campbell, Kentucky Steam founder and president. “7067 represents a quickly-vanishing era in railroading that is in many ways being forgotten, and this locomotive has historical relevance to our region as it and many others like it were once based at our facility in Estill County, Kentucky.” 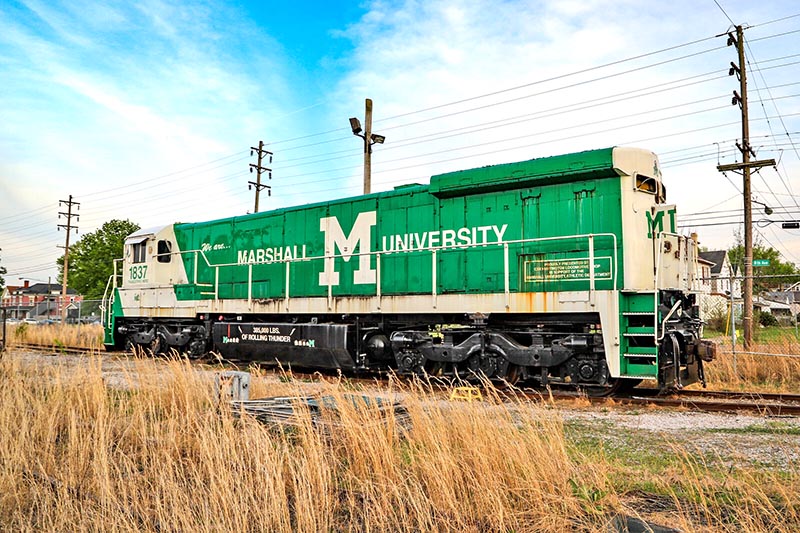 The former L&N Family Lines 7067 currently rests in Huntington, W.Va., in livery inspired by Marshall University. The locomotive was used for years as a game-day display for Marshall athletics and other events. Photo courtesy KSHC

The Kentucky Steam Heritage Corporation was founded in 2015 with the intent to restore and operate historical steam locomotive Chesapeake & Ohio 2716 which was leased on a long term basis from the Kentucky Railway Museum, in New Haven, Ky. In 2018, Kentucky Steam purchased a large portion of a former CSX railyard in Ravenna, and established a rail servicing facility in the former car shop complex. The complex itself once also housed a locomotive servicing station which was host to 7067 and other locomotives like it. Kentucky Steam plans to paint the non-operable locomotive back to its original “L&N Family Lines” paint scheme and make it an interactive display at their developing rail-based campus, likely parked on the fuel platform where it once was serviced.

As the C.P. Huntington Railroad Historical Society works on pairing down their asset list, they were intent on finding a worthy recipient of the 41-year-old locomotive and are happy to have found a partnership with Kentucky Steam. “Not having the facilities to restore it and knowing it was a rare engine, we looked for a group that had the means to restore it to its original appearance,” said Skip Reinhard, president of the Huntington, West Virginia-based railroad nonprofit.

Kentucky Steam plans to work on moving the engine later this summer, and will be hosting a fundraiser to pay for prep costs. Campbell said Kentucky Steam is happy to accept the donation of the 7067, although the acquisition was not foreseen before this spring. A formal fundraising effort for 7067 will be announced in the coming weeks.

On June 12th, Kentucky Steam will host an open house to the general public, and will give visitors the opportunity to see the continued progress on the restoration of the C&O 2716. For more information, membership and sponsorship opportunities or to make a tax-deductible cash or in-kind contribution to the project, visit www.kentuckysteam.org.