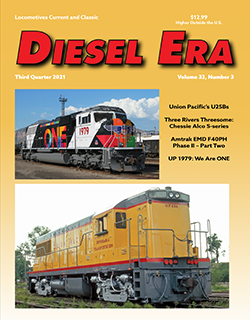 The second of a three-part series goes number-by-number through Amtrak’s four-axle EMD F40PH diesel locomotives, focusing on the mid-production or Phase II bodies.

by James Belmont — James Belmont presents an all-around look at newly repainted UP 4332, now UP 1979, decorated for the road’s “We Are ONE” program.

Former Saratoga & North Creek EMD BL-2s 52 and 56 have been acquired by Hoosier Valley Railroad Museum through a lease arrangement with a private owner.