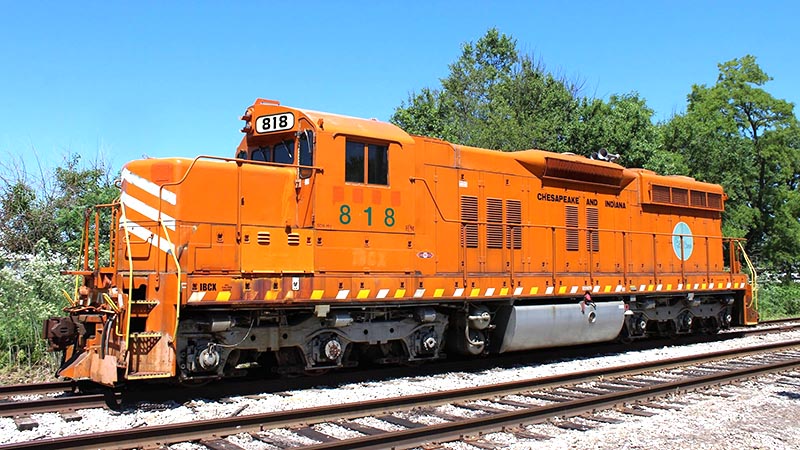 NORTH JUDSON, INDIANA – The Hoosier Valley Railroad Museum is delighted to announce that the Chesapeake & Indiana Railroad has donated locomotive no. 818 to the museum. The locomotive is a welcome addition to its growing fleet of historic equipment. It is currently operational and will remain in service, hauling freight until it is ready for delivery to the museum.

“We’re very excited to accept this locomotive,” said museum president Todd Flanigan. “This is a big donation, and it illustrates the renewed spirit of cooperation we have with the Chesapeake & Indiana. We are so happy to be partnering with them to preserve this piece of railroad history.”

The unit was previously owned by the Elgin, Joliet & Eastern Railway, an iconic railroad serving the steel industry in northwest Indiana. “The locomotive is historically relevant to the region and will be easily recognizable,” Flanigan stated. The Chesapeake & Indiana Railroad is managed and operated by Midwest & Bluegrass Rail, a rapidly growing firm focused on expanding its portfolio of regional and short line railroads. The firm recently gained the rail line over which the museum operates from the Town of North Judson. Leaders from both the museum and railroad have been building a solid working relationship.

The locomotive has been continuously used in freight service for more than sixty years and the museum plans to keep it in service by pulling its excursion trains. A favorite among Chesapeake & Indiana train crews, no. 818 has been well-maintained. It recently received a new main generator and power assemblies. Overall, the locomotive is in excellent shape and a reliable performer, but some work will need to be done to make sure it continues functioning as a dependable part of the roster for many years to come. The museum has already located a set of replacement trucks for the unit and will soon announce a fundraiser to help with the expensive task of replacing them.
Locomotive History

The locomotive is a six-axle diesel-electric unit originally built in 1959 by the Electro-Motive Division of General Motors as SD9 no. 172 for the Duluth, Missabe and Iron Range Railway. After decades of hauling heavy taconite unit trains, the DM&IR rebuilt the locomotive in their Proctor Diesel House. This entailed remanufacturing the 567 block and equipping it with 645 power assemblies along with other modernizations. In 1990, the unit emerged from the rebuild as SD-M no. 318. The locomotive served the DM&IR until 1998 when it was transferred to the Elgin, Joliet & Eastern Railway. It was renumbered to 818 and continued its heavy-haul legacy by moving steel and working the yards in northwest Indiana and the Chicagoland area. In 2003, it was repainted into the EJ&E’s “white chevron” paint scheme. By the late 2000s, the 818 was labeled as surplus motive power and auctioned off after acquisition by Canadian National.

Indiana Boxcar purchased no. 818 along with several other DM&IR veterans for its short line operations in 2010. The units were well-suited for hauling unit grain trains and could be frequently seen moving freight along the Chesapeake & Indiana Railroad in northwest Indiana. No. 818 spent a decade moving trains for the CKIN until the summer of 2021 when it was once again deemed surplus. Midwest & Bluegrass Rail offered to donate no. 818 to the Hoosier Valley Railroad Museum after the unit leaves regular service. It will be the first diesel road locomotive of the former EJ&E to be preserved. It will also be the only six-axle locomotive currently in the museum’s fleet.

Founded in 1988, the Hoosier Valley Railroad Museum is a 501(c)(3) non-profit educational organization dedicated to the preservation of railroad history in northwest Indiana. The museum educates the public through interpretive displays and its tourist railroad operations.

About the Chesapeake & Indiana Railroad

The Chesapeake & Indiana Railroad operates and maintains over 28 miles of track in Northwest Indiana. CKIN interchanges with both Norfolk Southern and CSX Transportation, affording customers flexibility in traffic routing and pricing options. The railroad is managed and operated by Midwest & Bluegrass Rail.