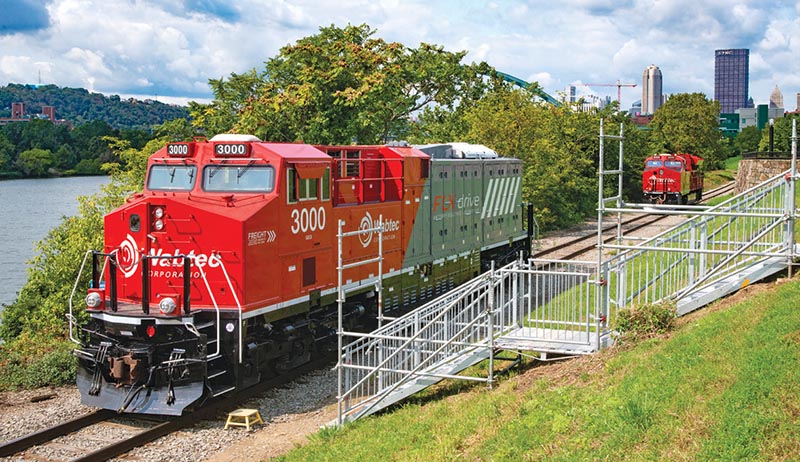 Like a typical General Electric diesel-electric Tier 4 ES44 road freight model (like 2044 shown in the background), the FLXdrive is rated at 4,400 horsepower, but it can generate sustained maximum power for only 30 to 40 minutes, according to Bruce Bloomster, a Wabtec commercial project manager. Its electricity output is 2.4 megawatt-hours, he said, but Wabtec is designing a next-generation model that will be capable of generating 7 megawatt-hours, with the increase attributable to improvements in battery technology. The next prototype is due in 2023. 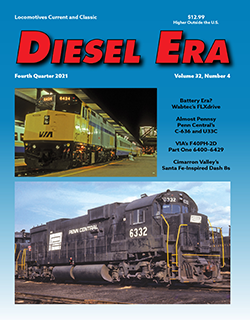 By Dan Cupper/photos by the author

A rail manufacturer, short line holding company, and university have announced formation of a consortium that they hope will revolutionize American railroading and eventually reduce the industry’s carbon footprint to zero. Pittsburgh-based Wabtec Corp.; Carnegie Mellon University, known for its engineering curriculum; and short line and regional railroad operator Genesee & Wyoming announced Friday, September 10, 2021, they have signed a memorandum of understanding to work to create a more sustainable freight rail network.

The parties will work on two fronts — developing locomotive fleets using alternative energy sources such as batteries and hydrogen fuel cells, and advancing current signaling and digital technologies to increase rail capacity and safety. From December 2020 to March 2021, GECX 3000 operated in revenue man-ifest-freight service on BNSF Railway between Stockton and Barstow, Calif., a run of about 370 miles. Although the engine’s cab is equipped with a control stand, the prototype is designed to operate in trailing configuration only, so it typically worked with BNSF diesel units fore and aft…

Read the rest of this article in the 2021-04 issue of Diesel Era Magazine. Subscribe Today!